Posted on August 28, 2019 by earthstonestation

Mullein is a medicinal herb native to Europe, Asia and N. Africa. The highest diversity of plants is found in the Mediterranean region. During the 1700s early settlers brought mullein seeds to the new colonies in N. America and the plant is now wide spread across the continent.

Mullein grows well in disturbed landscapes, such as along roadsides, railroad tracks, once cultivated fields and especially in alkaline soils.

Presently for medicinal purposes, mullein can be found in health food stores, often prepared for a soothing tea or an ear oil made of an infusion of the flowers. 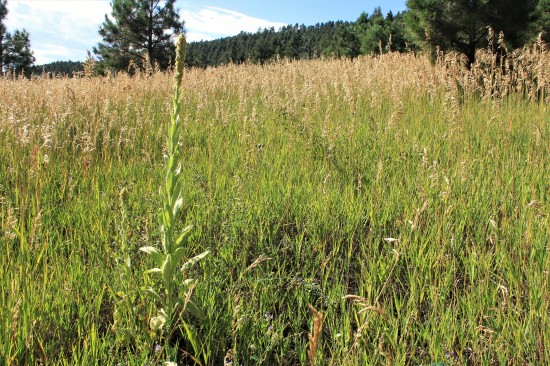 Mullein tea is a traditional treatment for respiratory problems, such as chest colds, bronchitis and asthma. Mullein tea is slightly bitter, a tea of the flowers is said to be sweeter. Both the leaves and flowers contain mucilage, which is soothing to irritated membranes, and saponins, which make coughs more productive. Research has shown that the herb has strong anti-inflammatory activity, and lab studies suggest that mullein flower infusions have antiviral properties, as well. 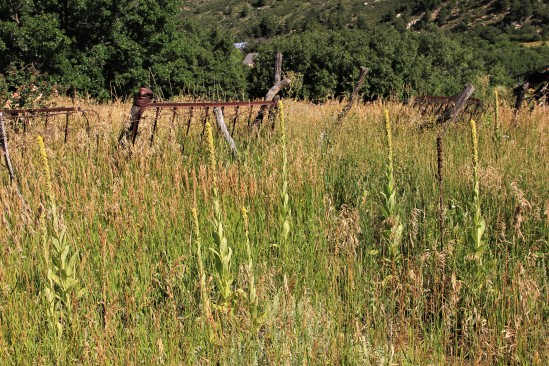 Besides the healthful benefits of mullein herb the plant has served many other purposes over the centuries. In Roman times the yellow flowers were used in a hair rinse to lighten the hair as well as to dye cloth. Ashes of the burnt leaves was also used to darken the hair. Mullein leaves were once placed inside of shoes which provided both warmth and comfort. Long ago the dried leaves were tightly rolled and used as candle wicks. Since ancient times the sturdy stalk with the flower cob soaked in paraffin has been used for torches. Legend states that these torches were often used by witches thus giving the plant the name Hag’s Taper.

Common mullein is a biennial plant. The first year of growth the plant produces a dense rosette of leaves (some as long as one foot) close to the ground. The second year of growth, mullein will produce a large erect flower stalk that can grow from 2′ to 8′. At the top of the stalk a club like cob of small bright yellow flowers bloom haphazardly throughout the summer. The plant is known for the softness of it’s light green leaves. The “velvet” softness of the leaves is created by a dense pattern of short hairs that cover both the upper and lower surfaces.

Soaked in water, several layers of the leaves can be used topically as a poultice or a useful compress. 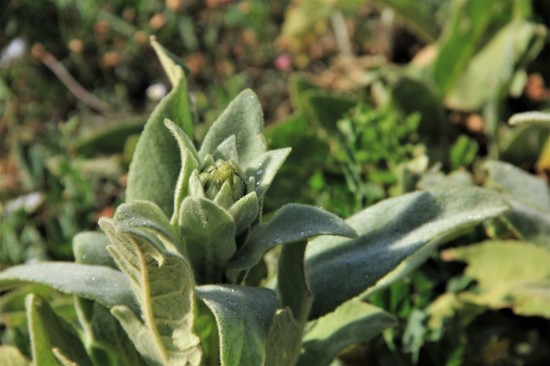 When harvesting mullein, the basal leaves of the second years growth is recommended. The leaves can be picked anytime throughout the growing season. A pair of sturdy kitchen scissors, pruning shears or small knife will easily cut the leaf stem. The large flat leaves stack neatly in a collecting bag, making little mess. At home spread the leaves out on a screen or table for a few hours in the sun to help with evaporation of moisture. Afterwards the leaves can be restacked loosely in a paper sack. The leaves might be set in the sack on edge also, the idea is to have some air circulation so that no mold occurs and the leaves can dry thoroughly. Leave the sack in a dry dark space for about 14 days and the herb should be ready for use.

By harvesting your own herbal leaves and flowers you get to choose the freshest, most wholesome looking of the plants offerings.

The most common use of mullein is as a tea to treat nearly any type of respiratory ailment. Crush the dried leaf or grind with mortar and pestle to produce a spoonful of small flakes. Prepare tea with leaf or flower in traditional manner and let steep for four or five minutes. Add honey to sweeten. Drink two to three cups during the day to relieve the lungs of ailment. A note of precaution: In some people the small hairs on the mullein leaf may be an irritant to the mouth and throat. To rectify this situation simply pour the prepared tea through a coffee filter before pouring into a cup.

Mullein leaf can be smoked to provide quick relief for lung congestion that is restricting breathing or in cases of a racking cough. It seems contradictory but the active ingredients in the plant are absorbed directly to the affected area. To prepare crush leaves for a consistent burn and roll into a cigarette paper or place in a pipe. Two or three draws should do the trick and then repeat about 15 minutes later. I tried this method myself several years ago with surprisingly good results.

Collecting the small yellow flowers of the mullein seed stalk can be tedious. The flowers do not bloom all at once but rather haphazardly throughout the summer and only last a day. A set of wide tweezers, small needle nose pliers or a pen knife will make the job of collecting the tiny flowers easier. It would be an interesting meditation to try using a set of chopsticks for gathering. A clean mason jar makes a good vessel for collecting. Although you may not gather a large amount of flowers from one particular plant there is usually another within twenty feet and remember new flowers appear with each new day. When thinking of how many flowers need to be collected to last until the next season consider if you will use the flowers in an infusion or used as a tea.

The infused oil of mullein flowers is perhaps one of the first remedies to think of in treating an ear infection and easing pain. A few drops throughout the day will do the trick. The oil also helps to clear accumulation of earwax, in which the oil helps to clear the obstruction.

The oil is simple to prepare. Pick the flowers (best in the morning after the dew has evaporated) and let them wilt for a few hours to reduce moisture content. Pack the flowers in a small glass jar with good lid and fill to the brim with quality olive oil. Set the jar, tightly capped, in the sun for a month or two and then strain into clean bottles. Your mullein flower infusion is ready for use.

Common mullein is considered a safe herbal remedy. No adverse side effects have been reported and research reveals there are no reports of serious toxicity with mullein. 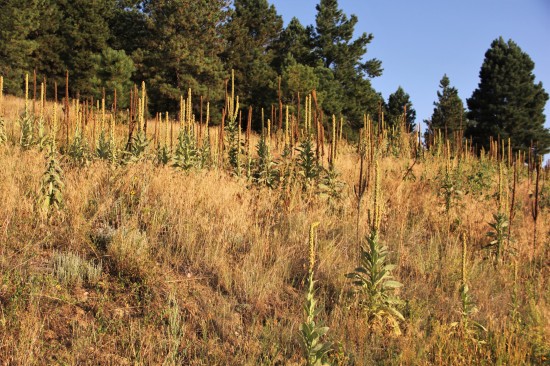 Next time you go out walking in forest or field take a small sketchbook with you. As you walk along concentrate on the plants around you. Most of them you will recognize. But do you know their names? Are they edible? Do they have medicinal properties? If you find an unfamiliar plant that you are particularly attracted to try making a simple sketch. Write down some info like, height, color, type of leaf and arrangement, size of flower and whatever else you think is interesting. Later on you can use a field guide to plants of your region to identify your interesting find. A field guide can teach you what criteria and characteristics must be defined to identify a plant. That sketch book that you carried can also be used to press flowers and leaves between the pages so that they may be examined more closely back at home. Have fun.

Be well my friends and stay close to the Earth, Dohn